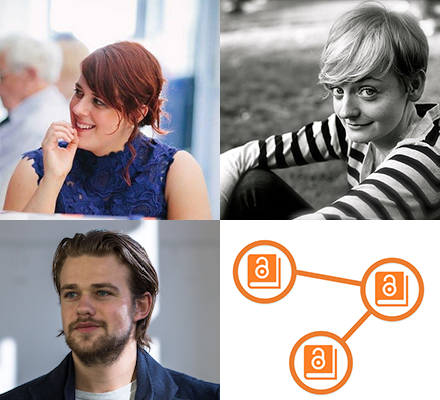 Welcome to Commons Highlights — a new series highlighting groups, sites, and organizations that make the Commons their home. We will be speaking with users who have created vibrant and thriving communities on how they did it, and the lessons they have learned.

The Open Access Books Network (OABN) was begun by members of OAPEN, OPERAS, ScholarLed and SPARC Europe to foster discussions about OA books among researchers, publishers, librarians, funders, infrastructure providers, and other stakeholders. What started on Slack after the ELPUB 2019 conference has become a thriving Humanities Commons group of over 180 members, engaging in events, discussions, and the sharing of ideas and information.

The OABN Humanities Commons group was built by the OABN’s coordinators, Lucy Barnes, Editor and Outreach Co-Ordinator at Open Book Publishers; Tom Mosterd, Community Manager, OAPEN/DOAB; and Agata Morka, European Coordinator OA books, Open Book Publishers. The group was looking to boost engagement and open new ways for members to interact. They chose to move to the Commons because, as Lucy Barnes states, “The ethos of the Commons and the way it’s run is very much in line with our own values.” The Commons’ emphasis on privacy for user data, openness to all regardless of affiliation, and the fact that it is an explicitly academic space made it the ideal home for the group as they sought to increase discussion and boost membership. As Tom Mosterd points out, “A lot of the people on Slack were already familiar with the Commons,” so it seemed like a natural fit as they worked to grow the group and increase participation.

Using the Commons to Engage Members

In addition to providing a forum for discussion, the Commons group structure also provides an event calendar, shared files and docs, and the ability to maintain a WordPress-based group blog or website. The OABN website is used to publicize live events and uses a WordPress widget to incorporate a feed from the Open Access Tracking Project to provide updated news and information from the wider community. By consistently updating their website, the OABN team keeps members engaged and continues to activate discussion within the community. Lucy Barnes on driving group growth: “It’s been a mix of letting it grow naturally and using events to drive traffic.” For example, the team celebrated Open Access Week by posting a “mini-series of blog interviews about new and interesting initiatives within the open access book ecosystem” (Mosterd, 2020).

As the team uses the blog to drive event traffic, they use the discussion forum to alert users to events and engage members in discussion. The group puts on one to two events per month and providing links to the event recordings on the Commons reaches those who could not participate live and preserves the content for future members. By creating group events using the community calendar and publicizing those events through the group blog and Twitter, they have been able to not just maintain discussion, but grow it. Allowing the group to be publicly visible encourages people to drop in to see the conversation and then join to take part in the discussion. Twitter has been vitally important in driving users to the group and events, as well as own personal networks and peers.

The OABN team has done several things to grow their group and that have contributed to their success. By reaching out and engaging with other initiatives who are working on similar topics, Barnes remarked, “it’s easy to collaborate with other groups on Commons.” CORE deposits can be posted to up to five groups at a time, alerting not just your own members but other key groups to new papers, syllabi, or learning materials. As a public group, any member of Humanities Commons can join in the conversation, which can help draw in users who may just be exploring the idea of open access publishing.

Barnes, Mosterd, and Morka were also conscious of helping to “demystify” the Commons for new users by providing a clear description of the group, contact information for the administrators with specific information how to seek help, and providing an explainer pinned to the top of the discussion forum on how to register and join the group with clear guidelines on participation. The openness has encouraged people to join and ask questions and has allowed several students to post surveys and conduct research among its members.

By using multiple forms of engagement, the OABN team has been able to gauge how the community has received different kinds of content. Twitter allows for discussion with the wider community outside of the core group membership, and the discussion forum and blog allow for focused discussion on events. Barnes has also been using the Google Analytics plugin to look at site traffic and most-visited content.

Barnes says the group plans to “use [the Commons] to gather community feedback in a more structured way.” She indicated open access publishing is a diverse community and that there are a lot of policy developments under discussion. Large presses have advantages in getting their voices heard, while many smaller presses do not. The Humanities Commons group makes gathering the perspectives of smaller presses easier. While they have not used the Docs feature much yet, Barnes views it as a way “to think about different policy areas that might benefit from discussion and where people may not always agree, but where they can represent their points-of-view in a way people can look back on and refer to, and that we can perhaps present as well.”

The other key area that OABN wants to grow is to find ways to make it more useful for people new to open access publishing. The community is currently made up of mostly publishers, but seeks to bring students, researchers, librarians, and others with an interest in OA publishing on board. Barnes remarked that Humanities Commons attracts the kinds of individual researchers and students that they would like to connect to the community. Mosterd added, “I hope that people will find our network and ask their questions. That it becomes more of a place where researchers, students, or people new to the library or publishing world can find resources. There are a lot of people there who can help them.”

If your group is interested in being featured in Commons Highlights email hello[at]hcommons.org.